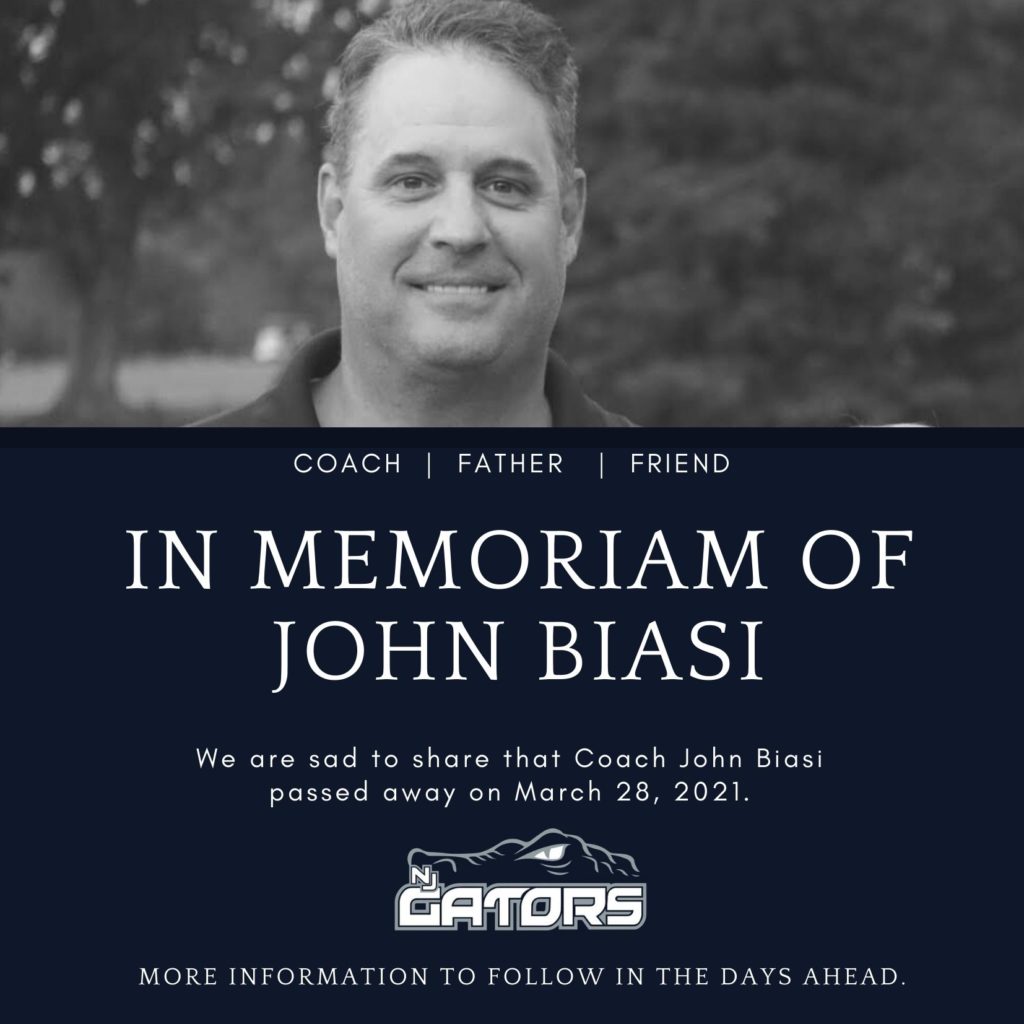 It is with great sadness and disbelief that we share the passing of our one-and-only, beloved coach and friend, John Biasi. John passed away suddenly at home on Sunday.

John Biasi, The Founder and President of the NJ Gators Softball Organization, has touched more lives than any could ever know or imagine.  Our Gator Family is truly devastated and saddened by his loss.  We are in disbelief! For years, he championed the sport as well as his individual players. He challenged those around him to be the best they could be in all aspects of life. He has inspired so many excellent athletes. But beyond the fields, he has inspired so many more to be excellent people; to serve others, to seek to do what’s right, to make the most of every opportunity, and to shoot for the stars  The softball community has lost a legend, a leader, and an inspiring & empowering coach and friend that can never be replaced.

John spent countless hours coaching our children.  There wasn’t a day that passed that he didn’t think about what was next. He poured every ounce of his energy into making us who we are.  He wanted everyone to know who the NJ Gators were.  His passion was unparalleled.

John loved to win, but more importantly he loved to make our girls bigger & better, stronger & more powerful.  Not just physically, but emotionally too, and that’s what made the difference. John was tough. He never settled for less than the best. Our children have strength and knowledge that is beyond the norm. John drove them to be best. John never let anything go. He never gave up.  He was outstanding at developing our children physically and emotionally. Gator Nation will never be the same.

Humor was a powerful tool used by John. He could make you laugh and correct you all at once. He often used his impeccable timing to deliver just the right word in the right way.

John was larger than life and his faces were one of a kind. You could see his excited look, side glance, eye roll, or smirk of approval from across the field. Usually the smirk of approval included a head nod and a “Not bad, kid.”

John knew softball; he was a masterful coach. The NJ Gator’s practices were unmatched under his watchful eye. Every coach and player on the field was engaged constantly. Even the parents were called upon and put into action. John was very generous and open with others, welcoming players and coaches from other teams to come, learn and participate in the practices. Beyond team practices, John gave private batting lessons in what Gators teammates affectionately refer to as “The Swamp.” He spent countless hours there with players over the years; investing in them, correcting them and encouraging them. One positive word from Coach John and they could take on the world.

Each and every one that has had the pleasure of knowing John, has gained something valuable. There was nothing that he wouldn’t do for his TEAM! He would walk through fire. He’d bend over backwards. He knew what he had and that is ultimately what fed his desire to charge forward, EVERY DAY.

There is a quote that reads, “The true worth of a man is not to be found in man himself, but in the colours and textures that come alive in others.” John Biasi touched so many lives and made a significant impact on everyone he met. He leaves a strong legacy of caring for others, of doing things for the right reasons, and of working hard towards a worthy goal. He challenged those who played for him and against him. And, he brought out the absolute best in those who knew him well.

He will forever live in our hearts.  His faith, his persistence, and that drive and focus will resonate within each of us.  Your leadership and guidance will prevail and your girls will move mountains for you. You will forever be missed and never forgotten. Rest in Peace! We Love you now and always!